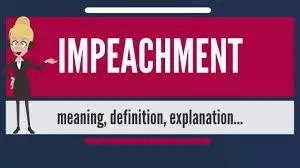 Impeachment Process in Nigerian Constitution will be explained here. This will avail Nigerians information on impeachment process.

There was a time when the house members almost moved a motion for the impeachment of President Muhammadu Buhari, because of the simple reason that he withdrew 469 dollars for the acquisition of twelve Tucano aircraft in order to use in fighting terrorism without the prior consent of the lawmakers.

They described his action as an impeachable offense. Even though the motion never saw the light of the day, it is important to know what the process would have been like.

Impeachment is a process whereby the deliberative assembly which possesses powers to make laws in a country brings up charges against a person holding a governmental office e.g. the President, Governor, etc.

In its original definition, impeachment does not automatically means removal from office, it only means that a person who is impeached will face the possibility of being removed by the vote of the lawmakers, and in Nigeria, it takes one-third of the members of the National House of Assembly.

Because of the nature of impeachment, it is reserved till when a president commits a capital crime against the nation, crimes such as treason, bribery, etc.

Just like every other country that allows room for impeachment, Nigeria’s constitution has its own procedures embedded in section 143 of the Nigerian Constitution.

Below are the Impeachment Processes in Nigerian Constitution:

Read Also: Problems of Unemployment in Nigeria and Possible Solutions

History of Allied Air in Nigeria

10 Ways to Care for a Child with Special Needs