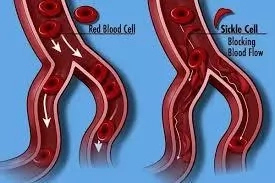 How is Sickle Cell Anemia Inherited

Sickle cell anemia or drepanocytosis is a genetic disease of the red blood cells (RBCs). It is an inherited blood cell disorder, which causes the RBCs to deform, giving them an abnormal crescent shape resembling a sickle, instead of the normal disc-like shape.

This, therefore, inhibits the flow of blood into different parts of the body because the RBCs become sticky/rigid and tend to get trapped in small blood vessels in the body.

RBCs generally live for about 120 days. But, Sickle cell anemia makes RBCs live for a maximum of 10 to 20 days.

Therefore, this disease makes the body lack healthy and sufficient RBCs to carry adequate oxygen around the body, resulting in tissue/vessel blockage.

When this happens, it causes pain, tissue damage, and poor hydration and leads to other complicated health challenges.

Before an individual is said to have Sickle Cell Anemia, the person must have been tested to have two copies of the gene.

Some patients have frequent and painful sickle cell crises, while others seldom have attacks.

People from regions that have endemic malaria are more likely to be carriers of this disease. This includes people from Africa, India, Saudi Arabia, etc.

Read Also: Genotype and Genetic Compatibility in Human and Organisms

Sickle Cell Anemia varies in types. These types depend on the nature of the mutation of the sickle cell gene. They include:

This is also known as Hb SS. It is the most severe and most common type of sickle cell disease.

It occurs when the carrier inherits copies of the hemoglobin S gene from both parents. People with this type of sickle cell anemia exhibit the worst symptoms.

This type is also known as Hb SC. It occurs when an individual inherits the Hb C gene from one parent and the Hb S gene from the other.

Carriers of this type exhibit similar symptoms with carriers of Hb SS but, symptoms appear to be less severe compared to that of Hb SS.

This type of anemia affects beta-globin gene production in carriers. Therefore, there is a reduction in the size of red blood cells produced because less beta protein is made.

Symptoms of this nature of sickle cell anemia are quite minimal compared to the first duo we’ve looked at.

This type of anemia involves the beta-globin gene. It has similar symptoms to Hb SS anemia. Although the symptoms of beta zero thalassemias are sometimes more severe.

Others are hemoglobin SO, hemoglobin SE and hemoglobin SD. These types of sickle cell anemia are rare and often have fewer symptoms/complications.

Symptoms of sickle cell anemia often show up at a tender age. They appear in babies as early as 4-6 months old.

If an individual exhibits the symptoms above, he/she should be taken to a certified medical center for blood tests such as Blood counts test, Blood films test, Sickle solubility tests, etc.

To also detect the type of sickle cell anemia an individual carries, a hemoglobin electrophoresis test is carried out on such an individual.

There are numerous ways of treating/managing sickle cell anemia. These include:

Oxygen, nutrients, and RBCs from donated blood are transported/infused into the patient’s body system. Oxygen is given through a mask to the patient. This makes breathing easier and improves oxygen levels in the blood.

The red blood cells tend to assume their normal when the patient is rehydrated with intravenous fluid.

Strong pain medication such as morphine can be used to relieve pain during a sickle cell crisis.

4. The use of Droxia and Hydrea can also help increase the production of fetal hemoglobin.

5. Immunization is also carried out to boost patient immunity as they tend to have low immunity.

6. A bone marrow transplant can also be carried out on the carrier of sickle cell anemia.

This transplant is best suitable for children under the age of 16.

Read Also: Why You Should Start Drinking Sufficient Water

In addition, patients with sickle cell anemia are advised to:

Contact your doctor immediately if you feel symptoms of any infection.

We hope you learned from this article!