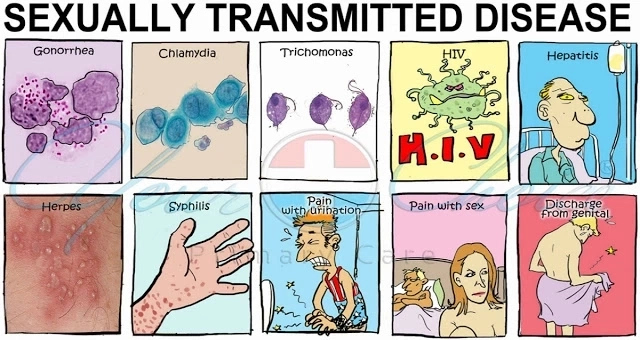 12 Sexually Transmitted Diseases: Symptoms and Remedies are listed and explained herein. You will find this helpful and informative.

What are the top 10 sexually transmitted diseases

The high rate of promiscuity in society today has caused widespread sexually transmitted diseases. This has gotten to the extent that people turn deaf hear to knowing their health statuses.

Not all sexually transmitted diseases can be cured medically. But some could be managed especially if diagnosed at an early stage.

This is why it is of great benefit to us to know our statuses on these diseases from time to time. These infections have their causative agents such as bacteria, viruses, yeast, and parasites.

The types of Sexually Transmitted Diseases are as follows:

This is a common sexually transmitted disease caused by a bacteria known as Chlamydia trachomatis.

This disease is a curable one if treated. It infects both men and women and most carriers do not know they have it because it barely shows symptoms. But in a scenario where symptoms occur, men experience the following:

In some cases, chlamydia infects the human rectum resulting in pains and bleeding.

This disease, should not be nursed for long in the body because it can lead to permanent damage to the female reproductive system (Infertility).

It doesn’t really have an adverse effect on men but, affects the epididymis and can lead to severe pain, fever, and sometimes reduce fertility rate.

This infection can lead to arthritis in both men and women, as well as increase the chances of getting HIV/AIDS.

Consistent intake of antibiotics can help kill this bacteria but, you are still advised to see a Medical Doctor for diagnoses and treatment.

This is another curable bacterial infection caused by Haemophilus ducreyi. This bacteria attacks tissues in the genital area and produces sores/wounds referred to as chancroid or ulcer.

Certain symptoms observed in Men are:

Common symptoms observed in women include:

If you observe any of these symptoms, you urgently see a Medical Doctor who will diagnose and prescribe strong antibiotics to heal the sores and kill the bacteria.

This is another curable bacterial infection amongst women. Women have both bad and good bacteria in their vaginas. When there is an imbalance between these bacteria, such an individual becomes prone to bacterial vaginosis (BV).

BV does not cause any other health problems. But, it can lead to other issues, especially during gestation and conception.

Basically, around half of carriers, showcase no symptoms. But if they do, you could notice:

Infected person(s) could visit a medical doctor for antibiotics recommendations to cure this infection.

Nongonococcal Urethritis is another sexually transmitted disease caused by a bacteria known as Chlamydia trachomatis.

This infection is of the urethra commonly found amongst Men. It takes between one to three weeks before a Man develops symptoms such as:

If this infection is not treated appropriately, could result in severe pains, swelling, and sterility.

Patients are therefore advised to seek medical attention as soon as possible and take recommended antibiotics.

This disease is also known as pubic crabs caused by parasites. These parasites are very tiny. They attach themselves to the skin, feed on the blood, and shaggy the hair in the genitals. This disease is a curable one and highly contagious during sexual intercourse.

Carriers of this infection will observe the following symptoms:

Carriers of this infection are advised to see a Medical Doctor for a medical prescription and are as well advised to use recently washed beddings, towels and clothes after treatment, to avoid spreading.

Carriers are advised to disinfect, wash and sun-dry all fabrics used during the infection.

This is another bacterial type of sexually transmitted disease that infects both males and females. This disease, in many cases, does not show symptoms. This is why most carriers don’t know they are infected.

But when symptoms appear, Men exhibit the following:

While Women exhibit such Symptoms as:

Please book an appointment with a Medical Doctor if you notice any of these symptoms for proper diagnosis and treatment.

This is an extremely contagious viral type of sexually transmitted disease. This virus forms painless rashes/pearl-like noodles that do not itch on the skin. This infection mostly affects children under the age of 15 and is contracted via skin-to-skin contact.

When this infection is sexually transmitted, the main symptom is rashes and the rashes form clusters on the: genitalia, lower abdomen, thigh, and groin in order to spread to other parts of the body.

This infection disappears on its own even without medical intervention but may take time but medical advice should be sought because this might mean low immunity.

This is another sexually transmitted disease caused by a bacteria known as Chlamydia trachomatis.

Carriers of this infection may undergo:

Diagnosis of this infection is done via serologic, culture, or nucleic acid amplification testing of a direct specimen and not clinically alone.

Early and accurate diagnosis is very essential in this case because it could pose chronic permanent infections if not properly treated. Patients are advised to take Doxycycline and as well see a Doctor for more advice.

People with this disease develop small painless sores. These sores occur in genital organs and around the mouth.

Common symptoms exhibited by victims include:

If this infection is not properly treated at this stage, it may result in paralysis, blindness, deafness, impotence, and even death.

This is why it is advisable to know your status in order to procure the necessary treatment as early as possibly diagnosed.

Read Also: Why You Should Start Drinking Sufficient Water

This is another parasitic sexually transmitted disease. This disease infects both men and women. Men who have this infection, display no symptoms most time. But when they do, they showcase the following symptoms:

Women with this infection experience:

The presence of this infection in pregnant women makes them deliver their babies untimely. Please if you are exhibiting any of the above symptoms, use metronidazole or tinidazole and ensure you still see a Medical Doctor.

It attacks the human cells and destroys the T-helper/CD4 white blood cells. Thereby replicating itself inside these cells. If left untreated, the victim becomes weaker and can no longer fight off life-threatening infections.

HIV is best managed when diagnosed earlier with antiretroviral to boost the immune system but if left untreated, could result in Acquired Immune Deficiency Syndrome (AIDS) which comprises all symptoms and illnesses that occur at the stage of HIV.

AIDS occurs when the body can no longer defend itself again. Aside from sexual activities, HIV/AIDS could be transmitted via breast milk, infected sharp objects, blood transfusion/contact, and the mother transmitting it to a child during gestation.

Certain symptoms observed by carriers include:

There are so many other symptoms because the person is susceptible to diverse infections.

HIV has no cure but can be managed with antiretroviral if used judiciously. This is why you are advised to know your status from time to time.

This is a viral type of sexually transmitted disease of the liver. Aside from blood and fluid contact, it could be transmitted by an infected needle, and the mother passing it to the child.

Person(s) having these symptoms should please go for a medical checkup, proper tests, and treatment if need be.

In conclusion, it is advisable to know your status from time to time. Ensure you run these tests at least every 3months to be on the safe side. A stitch in time saves nine.