Everything You Need to Know About First Trimester of Pregnancy 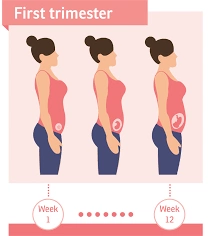 Everything You Need to Know About First Trimester of Pregnancy is listed and explained one after the other in this article.

1. You may or may not experience the symptom of Amenorrhoea

Read Also: How to Get Pregnant Fast Naturally

Whenever a woman misses their period, it’s a sign that she is already one month or 4 weeks pregnant. As such the pregnancy calculation starts from the day that she misses her period.

Even when she is examined at the hospital, she is likely to be asked about when she saw her last period. It is often used to determine her expected date of delivery.

Most women experience fullness and discomfort just prior to their menstrual period. During first trimester of pregnancy, the breast becomes fuller, firmer, and tenderer.

The changes in the breast are caused by the female sex hormones estrogen and progesterone produced by the placenta.

These hormones are responsible for the milk sacs of the breast and lead to fat being accumulated around the breast.

Also, the prickly and tenderness frequently felt is simply due to an intensified or enlarged flow of blood through the blood vessels supplied to the breast.

4. Some degree of nausea and vomiting

During first trimester of pregnancy, several pregnant women may experience some degree of nausea or vomiting, especially in the morning.

Nausea is one of the most frequent symptoms of pregnancy. It varies in some women. To some women, it usually in the early hours of the morning, while to some, it occurs in the afternoon, evening, or immediately or a few minutes after a meal. Women who experience nausea are found to vomit recurrently and it can sometimes affect their appetite.

During first trimester of pregnancy, the kidneys work over-efficiently, and the bladder fills with urine more rapidly. This leads to the frequency of urination which is an early symptom of pregnancy.

6. The sight of the first trimester

When it is only 28 days old, conception happens fourteen days after the first day of the last menstrual period. Later around the eighth week, the fetus becomes more human in appearance as the pregnancy goes further.

Read Also: What to Avoid During Pregnancy

7. Enlargement of the womb

During first trimester of pregnancy, the womb enlarges to suit the little size of the embryo. The embryo is often about 1.25cm long.

The placenta at this point becomes bigger and weighs more than the embryo itself at 6 weeks. Then during 8 to 12 weeks, the embryo increases to about 2.5cm long and looks more like a human.

The formation that often takes place includes the formation of the eye socket, it has a reptile-like head and a small tail. Its arm and leg buds are visible but very tiny and small and look spadelike in shape.

Later during 8 to 12 weeks, the limb buds become arms and legs with very tiny fragile fingers and twisted toes. Even the eyes become covered with eyelids which may close across them and stay close throughout the first trimester of pregnancy.

Many pregnant women often feel wearier and exhausted at any slightest thing they do.

Doctors at this stage try their possible best to encourage every pregnant woman to have a healthier mind during the first trimester of pregnancy.

This is also advisable to avoid unnecessary anxiety as various pregnancy symptoms occur. It is important to know that certain bodily changes defer and one cannot rely completely on the experience of another, especially during the first trimester of pregnancy which is a very sensitive period.