Importance of Federalism in Nigeria 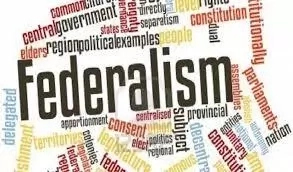 Importance of Federalism in Nigeria are listed and explicated herein. We do hope that you find this article helpful.

Advantages of Federalism in Nigeria

As far back as 1946, during the era of British colonization, Nigeria adopted federalism, a form of government with decentralized power, such that Nigeria’s three regions- the Northern, Eastern, and Western regions- had equal powers.

Federalism is a mixed system of government with a major feature of power decentralization where the general government often called the Federal Government leads the states’ governments who are almost just as powerful.

Importance of Federalism in Nigeria

The Importance of Federalism in Nigeria are as follows:

1. Federalism as an outline for development

Since gaining independence, the countries Nigeria looked up to use this system of government, and the zeal of the founding fathers to replicate such development at home, made them adopt federalism.

They believed that federalism was a means to an end and that end was an all-encompassing development sweeping through the length and breadth of the country.

But it is unfortunate that this has largely remained a dream due to the moral and political distortions inherent in our leadership.

Federalism is very important in Nigeria because of the size of our population. Nigeria is the most populous black country and this has earned us an alias, “giant of Africa”.

Not only is Nigeria’s population compared to those of other countries, huge; it is also growing daily. As of 2012, the population was about 166.2 million but this has increased to 200.96 million in 2019. In order to carry everyone along, a system of government with more decision-takers is necessary.

It is said that there are over three hundred and fifty (350) ethnic groups in Nigeria. Although three major tribes (Hausa, Yoruba, and Igbo) have been selected as the main Nigerian languages, the need to avoid drowning the voices of the minority groups in the stream of the major groups is both glaring and necessary for peace to reign.

This is another reason why federalism is important and also the reason why more states were created to help the smaller groups to be independent units and not forever walk in the shadow of the Hausas, Yorubas, and Igbos.

3. The size of the country

Nigeria as a country occupies a large geographical area and what she has as singular states in Nigeria is the equivalent of the entirety of some other African countries.

Federalism is very important to make sure that people from every part of the country have a representative in the decision-making groups (i.e house of representatives and in the Senate).

This is to ensure that everyone feels a sense of belonging. Such that when a project is embarked on the ownership and we-feeling will make it get full support and less antagonization.