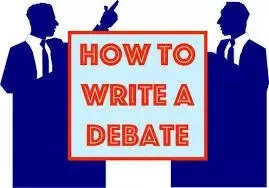 Write a Debate either For or Against the Motion is discussed in this article. We hope you find it educative and satisfying for your research.

Read Also: How to Write a Biography

As a part of your English Language course work, you might be required to write a debate or for a contest such as an oratory competition.

You might be required to speak for or against a particular topic, say, “Social media is pivotal to political apathy among Nigerian youths”.

A debate is essentially an argumentative essay that is written in the form of a speech. In a debate, one must be assertive and write in a tone that reeks of vehemence.

In this article, the steps you need to take to write a great debate will be expounded upon. So if you have a pending class project to turn in on this subject, you are in the right place. How is a great debate written?

Read Also: How to Write a Condolence Letter

First of all, it begins with proper and in-depth research of the various components of the topic in question.

If for instance, the topic is, “Social media is pivotal to political apathy among Nigerian youths”, a careful examination of the relationship between social media and Nigerian youths would be a necessary research area.

This would involve answering questions like; how many youths have access to the internet? How much time is averagely spent on various social media platforms by youths?

How many youths followed the election on Twitter rather than go to their polling units to fulfill their civic duties?

The second step to take after you have understood both sides of the debate is to find a strong opening or intro.

Read Also: How to Write a Book Review

The first thing you say is a strong determinant of whether you would catch and hold the attention of the audience until the end of your own speech.

You also have stated the topic and be clear about which part you are speaking on. Make your stand known first before you proceed to buttress your point.

The third step, if you are not the first speaker, prepare your mind to intelligently tackle your opponents with well-thought-out and researched rebuttals.

This is the essence of coming armed with information on both for and against the case. Rebuttals are important because the best offense sometimes is a good defense.

It also makes the audience aware that you know exactly what you are going to talk about and leaves your opponent panicky, which is a contest that gives you an edge.

African fabrics. Connect your points and string them logically. Facts and figures are good ways to heap sand around the waist of your arguments.

Read Also: How to Write a Resume

For instance, you can say, if you are not speaking against, “According to Independent National Electoral Commission (INEC), 20,000 people between ages 18-30, (who are youths) registered and collected their permanent voter’s cards before the 2019 polls, only 2000 fulfilled their civic rights while more than 20,000 of these youths followed the election on Facebook and Twitter. You must be persuasive and strongly convincing as you churn out evidence.

Finally, let your conclusion be as the opening lines. Something that is jaw-dropping and able to charge the hall in roaring applause.

Health How To Life Aid