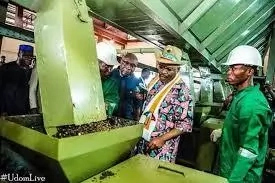 Sunshine Batteries Limited located at Essien Udim Local Government Area was incorporated on 17th of July, 1980 as a private limited company with the major aim of making a profit.

The company’s sole objective was to manufacture and market lead-acid accumulators like batteries of different sizes for cars, trucks, motorcycles, generators, telecommunication equipment, etc. under the brand name of “Sunshine Batteries”.

The company was commissioned on 15th November of 1984 and started production on 1 5th of February, 1985. It has an installed capacity of 300,300 batteries per annum.

Since inception, the company had never produced up to the installed capacity and gradually grounded to a halt in 1994 due to some problems which include acute lack of working capital, lack of adequate spare parts lack of personnel in some key areas, and lack of infrastructures like access road, telephone, and water.

The company had limited numbers of shareholders which prohibited any invitation to the public to subscribe to its shares nor the right to transfer its shares.

The capital required to set up and run the business was provided by the shareholders in form of shares which was solely private as the case may be.

One good thing about the company was in the event of liquidation, the personal assets or properties are protected by the law.

This made the band name of the company to be known as Sunshine Batteries Nigeria Limited. Due to the sole aim of making a profit, the company was managed by a board of directors appointed by shareholders.

Thus, as of 1993 the open market value of Sunshine Batteries limited (SBL) stood at four hundred and twenty-six million six husband thousand and ninety-seven naira N4260,600,097 but as a result of few numbers of shareholders coupled with the fact that shares cannot be sold to the public, the capital available for the use was limited. This affected the capital base and the company’s expansion.

Furthermore, several reasons affected the company’s expansion such as delay,s especially in decision making, and lack of confidentiality of account. In this company, accounts are not kept private but publicize to the general public.

Despite the challenges of Sunshine Batteries, the company still had to pay corporate tax, which was excessively demanded by the government.

Basically, it was expected that when the company faced a downturned, that decisions and proper structures were going to be put in place.

Rather before any decision was taken on any crucial matter, the board of directors or shareholders wasted so much time on decision making without making progress.

Conclusively, it is recommended that technical managers be commissioned to carry out diagnostic engineering study to identify the technical problems of the company and new technical partners should be sourced for the industry with a good workable agreement drawn. A successful reactivation of (SBL) will improve Akwa Ibom State input to industrial development in Nigeria.

Thus, if this company can be revived, efficiently managed, and controlled by a trusted board of directors who will be appointed by the shareholders with an agreement of legal existence.