Prevention and Control of Kwashiorkor 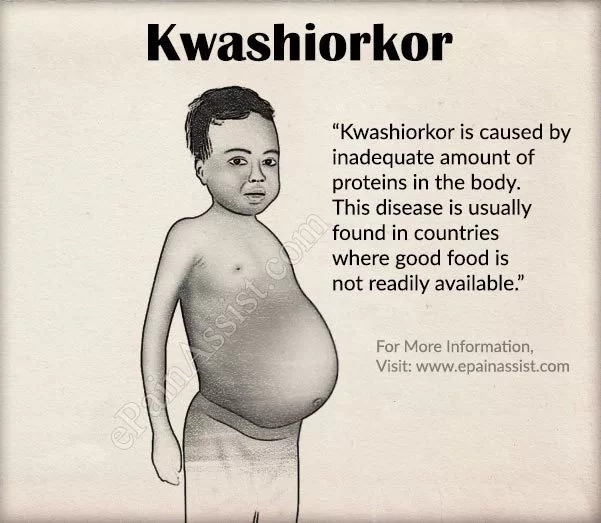 Prevention and Control of Kwashiorkor are discussed herein. We hope you find the article informative and able to satisfy the demands of your research.

The knowledge of kwashiorkor prevention is very vital in child-rearing. In most cases, when the child is given the right treatment early enough, the improvement in the condition is very rapid.

In mild cases, the treatment can be given by the mother at home. The treatment is to improve the diet by the addition of good quality protein.

This can be done by giving fresh, clean cow’s milk or dried-skim milk powder. The powder is mixed in the sauce eaten with the basic food, in porridge, in soup, and with mashed fruit, such as pawpaw.

It should be given three times a day. In addition to good quality protein, the child needs adequate calories because if it is short of calories, then the protein foods may be drawn upon to supply energy and will not be available for their specific functions of building tissues.

Suitable foods are milk, meat, and eggs, which supply fat as well as protein. One ounce of sim oil, cotton-seed oil, or other edible oils can be added to the child’s food each day.

In addition to good food, the child also needs some care and attention from the mother. In many cases of kwashiorkor, it has been observed that the mother has become absorbed with her new baby while the toddler is left to fend for itself.

Often the 2 to 3-year-old is sent to some relative to break the tie with the mother, with the result that the child feels unwanted and unloved and loses its appetite.

Kwashiorkor occurs in areas where cassava, plantains, bananas, maize, and sweet potato are the staple diet. It is rarely seen where millet is the staple food.

There is rarely only one nutrient missing in any diet and lack of several nutrients may contribute to the symptoms of kwashiorkor.

There is enough evidence from the very rapid improvement of children who have been given milk, that insufficient good quality protein, as supplied by milk and the nutrients associated with it, is a major cause.

In Uganda, a combination of groundnuts, soya bean, sweet banana, sugar, calcium lactate, and some vitamin B12 has been effective.

In India, Bengal gram, jaggery, and peeled dried banana have been used. In Guatemala, a mixture of whole ground corn and sorghum, cotton-seed, hour, yeast for vitamin B complex, and calcium carbonate has been used successfully.

Read Also: Diseases Caused By Deficiencies In The Diet

The importance of this work is that it shows that certain mixtures of vegetable proteins of groundnuts and soya bean could prevent kwashiorkor.

In conclusion, the right food alone can often cure the condition. Food of good quality protein can prevent kwashiorkor. Protein is a necessity for every child.

In severe conditions, the child should be taken to the hospital at the right time to avoid further complications or loss of life.

What Happens if you Sleep too Much