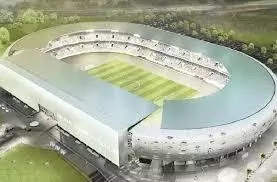 Best Sports Stadium in Nigeria will be listed and explained in this article. We hope you find it helpful and able to meet your research demand.

This has led to so many clubs in different parastatals. Most people now venture into sports or sport-related activities. This has tremendously led to the construction of the stadium across the country and at the moment, almost every state in Nigeria has a stadium.

But to crown it all up, some stadiums are far better than others hence, this article is written to bring to light the best stadiums across the country.

The Best Sports Stadium in Nigeria are as follows:

Indeed without any doubt, this prestigious stadium has ranked the best in the country because of its uniqueness. The stadium is said to be worth over 250 million dollars.

The stadium which was constructed by the Julius Berger group from the year 2012 and completed in 2014 has a seating capacity of about 30,000 people.

The stadium is also built in a way that it can be used for other activities that are not related to sport such as political campaigns, religious activities, social gatherings, etc.

The stadium is called Godswill Akpabio international stadium, named after the then Governor of the State which.

Talking about size, this stadium is the biggest. It has a seating capacity of about 61,000 people. The stadium seats at the Federal Capital Territory of the country.

This stadium was built by the Federal government and was used to host the 8th All African Games in 2003. The stadium’s worth is over 360 million dollars, making it the most expensive stadium in Nigeria.

The stadium is used as the home for Nigerian international football teams such as Super Eagles, Golden eaglets, etc.

During the tenure of Babatunde Raji Fashola as the Governor of Lagos State, one of the landmarks he made for the state was the construction of the stadium that was named after the Nigerian Professional footballer, Teslim Balogun as an honor to him.

The stadium seats about 25,000 fans and spectators and unlike the Akwa-Ibom international stadium, it is not a multipurpose stadium.

It is rather a single-purpose stadium and was built mainly for sporting activities. At the time of the construction of the stadium, it was said to be worth over 1.3 billion Naira.

The liberation stadium has been the home base for the Dolphin FC. The stadium was constructed to be a multipurpose stadium, it has a seating capacity of thirty thousand persons.

Enyimba international stadium was formerly called Aba Township stadium is situated at Aba and it was renamed to honor Enyimba FC when they won the 2002 CAF championship league.

It was a thing of honor to the clubs and their supporters and in a bid to appreciate them, the stadium was named after them. The stadium is built to occupy over 25,000 people.

Having known this information, you will realize as well as agree the sport is a serious business in the country and every sportsman should be proud of his or her professional.

Directory How To Sports

How to Become a Sports Journalist in Nigeria

How to Become a Football Agent: 3 Ways