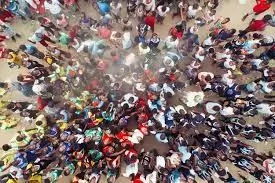 Solutions to High Population Growth in West Africa are listed and explicated in this article. We hope you find it informative.

Have you considered a country like China recently? They have a population that is so large that it is almost becoming unbearable and unmanageable.

This, unfortunately, will be the fate of some West African countries if some measures are not put in place to ensure that population growth is managed effectively.

In this article, we have highlighted some of the things that all countries in the West African continent need to put in place or do to ensure that the high population in West African countries is really controlled.

Below are Solutions to High Population Growth in West Africa:

It is ignorance that paves the way for the reproduction of so many children. There is no point in a family having more than two children or at most three.

Aside from the goal of reducing the size of the population in the nearest future, the economy will not even be in favor of birthing numerous children and in light of reducing the population, it will equally help the government plan adequately for the citizens rather than having a lot of people who are not catered for.

There is no point in a man marrying more than one woman, there should be strict laws guiding against that. Every man should be allowed to marry only one wife or better still allow only one of his wives to reproduce children for him.

Any religion or culture that encourages the practice of marrying more than one wife should be reviewed or abolished.

3. Sensitization of the masses

Most people still live in the dark in regards to the advanced rate of how things are done. The government should take it upon its shoulders to teach and encourage individuals to shun activities and practices that lead to the birth of more children.

Some of these activities include Rape, drug abuse, extramarital affair, early dating, etc. This is not the job of the government alone but that of even the entire communities at large. It is only on the platform of knowledge that some of these situations can be wiped off.

4. Early marriage should be discouraged

When people get married without understanding the economic changes, they tend to reproduce more children, even though they may be able to take care of these children, the ultimate effect rests on the population rate of the citizens of the country in the nearest future.

5. More Jobs should be created

Poor people have more children than the rich majorly because idleness often suggests sex on most occasions. When a person gets busy, he or she forgets about having sex at the moment, and even when he cokes back home late at night, he tends to be tired. As unpleasant as it may seem, job creation will play a major role in curbing the high population rate in West Africa.

Read Also: Importance Of Minerals To The Nigerian Economy

6. Family planning should be enforced

As long as the government keeps begging people to engage in family planning, more persons will still find it unnecessary. Family planning is not something that should be considered, it is a necessity.

Every newly married couple should be forced to engage in it so that though the initial may not be palatable, globally, the birth rate will be reduced.

7. Poverty should be reduced to the minimum

As long as a man remains poor, he will keep on hopping on one of his seeds to reproduce and this will often make him reproduce as many children as he can.

The government should come up with different poverty alleviation programs which will help the poor become either rich or average but not totally poor.

8. Borders should be monitored and migration reduced

There is no point accepting visitors when in the future, you will not have enough space for them. The migrants coming into the country should be given a limited time to stay and when they do, they should be properly monitored. No one should just relocate to the country but he should have a genuine reason for coming to the country.

These are some of the basic solutions that can be preferred to the problem of high population, it’s simple to control the birth and migration rate, once these two are controlled, there will be the hope of a slow steady population growth that is intentional.