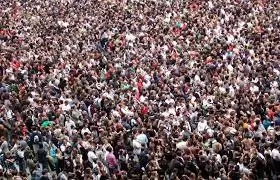 8 Disadvantages of Large Population are listed and explained in this article and we hope you find it informative and able to satisfy your research.

A large population is grossly defined as a situation in which the number of persons living in a particular region is equal to or greater than the number of resources available for the region.

In this article, we will be throwing more light on the disadvantages of the large population as it affects the economy of the nation.

The economic effect of a large population or high population density includes the following:

It is quite impossible to have a very large number of persons in a region and not expect a strain on natural resources made available. Humans usually have wants and needs and these wants tell on the natural resources of the land.

For instance, in Nigeria, if there were fewer persons using crude oil or gold, there would still be enough gold reachable for all but because everyone wants these things, they become expensive and rare.

The areas where there is an increased rate of people living there are often known for the High crime rate, this is because, in such areas, unemployment is usually on the rise and leading to crime rates such as kidnapping, stealing, car snatching raping, abduction, assassination, etc.

Due to the fact that a lot of people come into a particular area, there is usually a high rate of food insufficiency. This is because the farmlands which would have been used for farming activities would have been converted into a place of shelter and the little food that is produced by the available farms cannot cater to the needs of the high number of persons living in that region.

Areas which has a high population density usually do not have enough jobs for the continuously increasing influx of people into that area, this is because the available jobs there must have been occupied and others will just have to stay unemployed. This leads to unemployment and underemployment.

Read Also: Importance Of Minerals To The Nigerian Economy

As long as people are involved, shelter is a basic need of the people and because of the high rate of people in a particular region, housing is often a challenge.

Those who have land will further take advantage of that opportunity to build substandard houses so that they can house more people and make more money, not minding if the house will collapse or not.

Overpopulated cities like Lagos really understand the effect of Overpopulation as the road is always busy. Because a lot of people travel on the roads at the same time and sometimes, the carelessness of a driver or car fault often leads to traffic congestion most of the time.

Poor housing, overcrowding, noose from big machines and turn out of waste materials due to the high level of human activities amongst others generally lead to environmental pollution.

Basic social amenities such as pipe-borne water and electricity, which are used by everyone are usually overstretched as a result of the influx of people into a particular area.

These are some of the implications of a large population. The list here is quite not exhaustive but they are the basic ones, others include inadequate health services, lack of security, reduction in the standard of
living, high cost of living, amongst others.