10 Signs Your Marriage is Beyond Repair 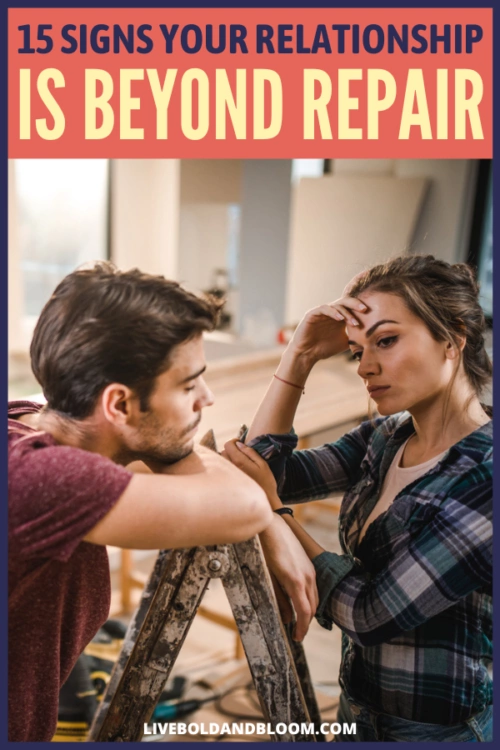 10 Signs Your Marriage is Beyond Repair are listed and discussed one after the other in this article. You will find it helpful.

How do you know when your relationship is beyond repair

The divorce process is managed or addressed by each spouse’s law attorneys. Divorce is a judgment issued by a court to dissolve an exciting marriage.

Before the court issues this legal dissolution, there should be signs that each spouse will tender to the legal house for the dissolution of the marriage or that it’s high time the spouse got a divorce. This article will explore such signs as the concept of divorce has its processes.

Violence can be done formally or even verbally. Society had mistaken the subject matter of domestic violence to be a case where the husband beats or maltreats his wife but in some sceneries, the reverse can be the case as well. It shows that there are also cases where wives beat their husbands.

Marriage is a relationship that exists between a man and a woman. The word relationship connects that the inputs of each party are valued and respected.

If the marriage is solely autocratic in nature, then it’s a sign of divorce. In many situations, the other party has no say at all and is forced to accept whatever decision is made by the autocratic spouse.

Read Also: 8 Reasons Why it is Important to Talk about Sex in a Relationship

For example, when the husband makes the marriage autocratic, he may decide to deprive the wife of freedom of movement, and socialization, cease her financial or earning power and restrict every right she had previously.

In some extreme cases, the woman may not even have access to families, friends, and loved ones. When the affected party operates only on the decision of the autocratic spouse as he or she uses force, threat, or coercion, then it’s a sign that the affected partner should get a divorce.

Psychologists describe a public disgrace as a pre-designed event with the intention to cause shame or embarrassment to the other person.

When one partner publicly disgraces another, it’s an indication that they had no value at all and can be easily replaced (or if not already replaced).

Public disgrace is accompanied by negative reinforcement or negative words which hurt the affected persons. When this is reoccurring, it can result in depression or even suicide.

The act is carried out in the interest of one person while the other party suffers tremendous effects. If a party suffers from recurring public disgrace, it is a sign that divorce is necessary as it could lead to violence when delayed in most cases.

4. Negligence of your ambition and career for no reason

This happens in cases, where people are married having a lovely career but are threatened by their partner to forgo their careers for no reason.

Marriage should complement and strengthen you and not mar you. Career is a field for or pursuit of consecutive progressive achievement, especially in public, professional, or business life and this helps to define and shape people in marriage as well.

The purpose of marriage is not for you to give up your already existing business life unless there is an understandable structure for a better plan but when a partner sees the career or ambition of his or her partner as a threat, and works exceeding to stop or even inhere their academic pursuit, then divorce is necessary for this situation.

When a partner is constantly threatened to be beaten or even killed then without all contradiction, it’s a sign that divorce is necessary.

In most cases, when the partner is eventually beaten to a point of death, getting a divorce may be too late. It is better to save one’s life than to have it in the grave resulting in the absence of restoration.

Read Also: How Active Listening Can Help Your Relationship

When a marriage is based on falsehood and deceit, it’s a red flag for divorce. When one party consistently defrauds the other, it is advisable to get a divorce as fast as possible to prevent future disasters.

As much as sex is an important part of the marriage, it should not be done with coercion or force. Raping in marriage is still an act or instance of robbing or despoiling or carrying away a person’s sexual right by force.

The occurrence of rape in marriage can be described as an unlawful sexual activity and usually sexual intercourse carried out forcibly or under threat of injury against the will usually of a female or with a person who is beneath a certain age or incapable of valid consent because of mental illness, mental deficiency, intoxication. Marital rape is a sign that divorce is necessary because it is an outrageous violation.

When a spouse has defiled the marriage bed such that he or she is infected, it is also a sign that divorce is necessary. There is a great probability that the infected person may infect the other party or even make their lives worse with the assumption that they have nothing to lose in life.

Such persons often blame the other party as being the cause of their irresponsibility and may want to infect them as well. As such, it’s a sign that it’s time to get a divorce.

9. Traits of  murder or killing the partner

Marriage is honorable and involves a lot of sacrifices but such sacrifice should not be unto death. In cases where a particular person usually threats to kill the other parties, using various weapons like knives, gun,s and any weapon, it is a sign that it’s time to get a divorce.

When your partner wants to inherit your property upon your demise using forceful means and there is evidence that proves these facts, then it’s a sign it’s time to get a divorce. There can be capable of poisoning the partner to ensure that their mission is fully completed.

Conclusively, divorce is necessary when these signs are seen, the marriage is considered inadequate or unsuited to an established purpose.

4 Simple Ways To Strengthen Your Marriage