Punishment for Illegal Bunkering in Nigeria 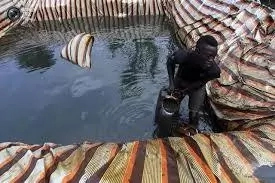 Punishment for Illegal Bunkering in Nigeria will be discussed here. This is to guide Nigerians on the danger of the crime of bunkering.

Oil bunkering is a term used globally in both the petroleum and marine industries. It is a legitimate business line that involves supplying fuel to ships.

As far back as the 1970s, Nigeria began letting its citizens take up the business venture of oil bunkering but due to some issues especially in the periods where the government seemed to be at the losing end, it had to be placed on hold.

Another impediment in the path of smooth progress for the oil bunkering business was the growing number of oil pipeline vandalizers (illegal oil bunkers) who majored in oil theft and re-sold at a ridiculously cheaper rate to ships.

As illegal bunkering, that is, the theft of petrol and sales to ship and water vessels without a government license grew, the legal bunkering began to shrink because they lost their patronage to those who were stealing oil and selling at really low prices.

The oil pipeline brought fast money to a lot of people but it did leave behind a lot of environmental issues that still haunt the people in the oil exploration communities in the South-south to date.

In 2013 when the Federal Government of Nigeria revitalized legal bunkering, it was a welcome surprise to many and the business saw the entry of new entrants who got their operating licenses from the

Department of Petroleum Resources (DPR). Since these licenses had to be renewed every year, it was clear that the comeback of oil bunkering was good for the economy because it will increase the government revenue.

The Department of Petroleum Resources (DPR) is saddled with the responsibility of regulating the business in accordance with the provisions of the Petroleum Act.

Since it is common knowledge that crude oil is the star of the Nigerian economy, as long as illegal bunkering keeps thriving, both the economy and legal bunkering will suffer.

It is for the aforestated reasons that the Economic and Financial Crimes Commission (EFCC) and the Nigerian Navy are asked to work with and join forces with the DPR in the fight against illegal oil bunkering in the country.

Punishment for Illegal Bunkering in Nigeria

This punishment or legal action to be taken against illegal bunkers include forfeiting the vessel used for the illegal bunkering and a jail term which could be as long as 40 years and/or a fine which is left at the discretion of the judge.

Directory How To Legal Aids

Process of Child Adoption in Nigeria