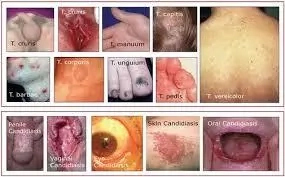 Fungal Diseases in Humans are listed and explained in this article. This is to guide you in caring for your health, health they say is wealth.

Fungi (being the plural form of fungus) have their presence almost everywhere on earth except in places that are extremely hot.

Scientific research has shown that there are millions of fungi species on the planet and some of them are even yet to be discovered.

Out of these known millions of fungi, only about three hundred species are known to cause different types of diseases in man and animals.

Diseases related to fungi are often related and caused by the presence and activity of fungus in our immediate environment.

The fungus lives mostly in things and places that are not clean or tidy, especially in the riverine areas where dampness is inevitable. From their inhabitation, they spread into the homes of people.

These fungi are sometimes so tiny that they cannot be seen with naked eyes. Today, the fungus can be found in every corner of the world up to the skin of a living person and animal.

This is a fungal infection that is orchestrated by a fungus known as ‘Aspergillus. This fungus lives both inside and outside the homes of people and it often enters the body through inhalation.

Those who have a strong immune system inhale this fungus but it has no effect on their bodies once the immune system is weak, the powers of the fungi prevail.

Some common health infection common with Aspergilloses is the infection of the lungs, allergic reactions, etc.

Read Also: How to Get Rid of Eczema in Nigeria

This is often an infection propelled by yeasts which is a member of the ‘candida’ family. The Candida species cause various infections in humans and animals.

The human body normally plays host to this fungi as it lives inside the body or on the skin sometimes without causing any worries or care.

Some of the places where the fungi live in the body include; the throat, mouth, mouth, and vagina. The common yeast infection amongst women is often caused by candidiasis and it is simply the overpopulated presence of the fungi in the vagina.

Sometimes, candidiasis enters the blood and is transported to other parts and organs of the body and causes lots of damage and serious conditions to the body.

Commonly called ‘Valley Fever&#39; is one of the most common fungus infections. Its primary habitat is beneath the soil and it is common in the Southwestern United States, parts of Mexico, Central, and Southern America.

The fungi are contacted by inhaling the fungi from the air. Although in most cases, breathing in the fungi dies does not make people sick but if it does the victim normally gets well in a short period of time while others will require treatment with some common anti-fungal pills.

As long as a person lives, he or she may not be able to prevent the inhalation of these types of fungi because it is microscopic in nature.

Talk of dampness and this dangerous fungus infection comes to mind. Although it is rare, this deadly infection affects either the lungs or central nervous system and sometimes both.

You must have seen those people with discoloration of their toenails, sometimes the nails even crack and break.

This is caused by a fungus, it makes the toenails hard and stiff. Scientifically, Fungal nail infections are referred to as onychomycosis.

There are other common fungus infections which include Mucormycosis, Sporotrichosis, Fungal eye infection, etc.