History of Democracy in Nigeria till date 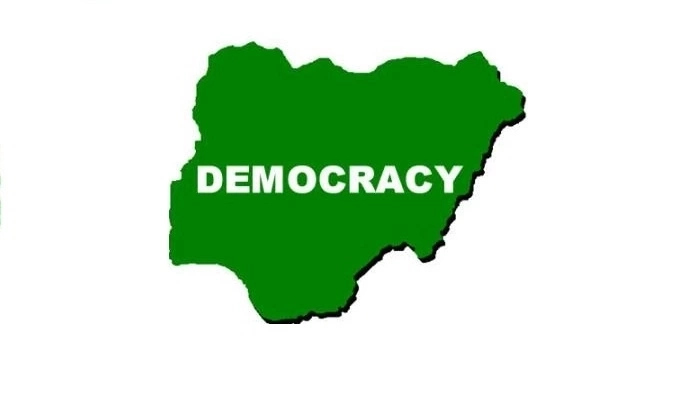 History of Democracy in Nigeria till date is aimed at bringing to the purview the concepts of Democracy, how it came to stay, and its effects.

History of Democracy in Nigeria till date

There exist numerous theories and concepts of democracy. Partly, these contrary theories could be integrated by a meta-theory or meta-concept at the same time.

However, it also should be understood that some of these theories and concepts of democracy clearly contradict each other.

This undoubtedly complicates every attempt of trying to establish on a meta-level a process of theory/concept integration.

There is no unanimity on the model to measure democracy. Its definitions are queried and there is an ongoing lively debate on the subject.

In etymological terms, the word democracy is derived from two Greek words dēmos, the “people”, and Kratos, meaning “rule”, “power” or “strength”. Joined together, the literal denotation of democracy is “rule by the people”, culminating in a popular form of government.

Historically, the origin of democracy dates back to Ancient Greek city-states of the fifth century BC, with Athens as the showiest example. Back then, democracy was the opposite of the aristocracy form of governance.

The current type of democracy was developed in the 19th and 20th centuries. Democracy from what is obtainable in Wikipedia is a “system of government by which political sovereignty is retained by the people and exercised directly by the citizens.”

Popular amongst all definitions of democracy is the November 19th, 1863 “Gettysburg Address” of U.S. president Abraham Lincoln who coined democracy as a “government of the people, by the people, for the people”.

Michael J. Sodaro (2004, pp. 31, ), defines democracy as: “The prime idea of democracy is for the people to have the right to determine the leaders who govern them and also elect the governing body and hold them accountable for their actions.

Democracy also imposes legal limits on the authority of the government by guaranteeing certain rights and freedoms to the citizens.”

With the three fundamental principles and the outlined basic determinants of democracy, Bühlmann (et al., 2008) identify the following key concepts: equality; freedom; and “control”. Summarily, they define freedom, equality, and control as the three core principles of democracy.

For democracy to exist, a given political system has to guarantee freedom and equality. Yet, it should optimize the inter-dependency between these two principles by means of control.

In talking about freedom, the (United States-based) Freedom House organization emphasize in its mission statement: “Freedom is possible only in democratic political systems in which the government is accountable to its own people; the rule of law persists; freedoms of expression, association, and belief, as well as respect for the rights of minorities and woman, are guaranteed.”

Looking at this context, we may raise such a question; whether North American scholars are considered more inclined to emphasize the criteria of freedom, and Western European scholars more on the criterion of equality?

The long walk to the attainment of Democracy in Nigeria began with the successful 1960 independence of Nigeria. After independence and Republican status in 1960, (that year Nigerians became the citizens of the 4th biggest democratic country in the world) and 1963 respectively, Nigeria experienced its first military coup in 1966 and thereafter civil war broke in 1967 and lasted till 1970.

It was possible to restore the democratic ideal for a couple of years in 1978. Though the period did not last too long and was over in 1983. How to be it, some military rulers who came into power via coup d’etat promised to return the country to democracy.

Nonetheless, only General Abdulsalami Abubakar took the power after the death of Sani Abacha and kept his word. The country’s modern Constitution became official in 1999.

The elections of 1999 were more successful compared to the previous military ruler. The emerged President Olusegun Obasanjo put a stop to the military regimes that kept switching one after the other for almost 30 years.

The end of the military rule culminated in a new era of regular elections as well as the return of civil liberties, a free press, and an end to arbitrary arrests and maltreatment, although human rights violations still occur regularly.

Also, Nigeria began a long campaign against the bureaucratic and military corruption that had crippled its economy and severely tarnished its international reputation.

Democracy in Nigeria is celebrated yearly. Though undeniably, Nigeria still has many problems to overcome. There is hope for a more prosperous and brighter Nigeria with a better economy, improved standard of living, and security.

In commemoration of the restoration of democracy in Nigeria, May 29th was declared a public holiday by President Olusegun Obasanjo.

However, the President Buhari-led Federal Government of Nigeria declared June 12 as the new day of Democracy in Nigeria.

This was in commemoration of the democratic election of MKO Abiola on June 12, 1993, in what has been adjudged to be the freest and fairest elections Nigeria ever had. But was cancelled by the Ibrahim Babangida Junta.

Groups And Types Of Groups In Organizations

10 Characteristics of Groups Formed Within An Organization

5 Stages Of Group Development in Organizations