Structures of the Earth 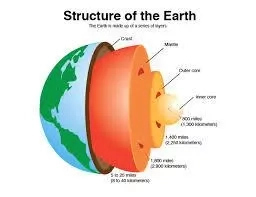 Structures of the Earth are listed and dissected in this article. Characteristics of each structure of the earth are also given herein.

Structures and Composition of the Earth

Read Also: Effects of the Rotation of the Earth

Apart from the earth’s sphere, the earth also has its unique structures which are commonly referred to as the internal or inner structure of the earth. It is made up of three concentric layers which are the following; Crust, Mantle, Core.

1. The Crust or Lithosphere

It is otherwise called the Lithosphere. It has the following characteristics;

It is otherwise called Mesosphere. It has the following characteristics;

It is otherwise called Barysphere and has the following characteristics

Read Also: What You Didn’t Know About Water

It is in a molten state. The correct arrangement of the layers of the earth crust from the surface to the interior 18 51a}, sima, mantle, and core.

Within the Atmosphere ‘Water vapor combines to form clouds and rain. Oxygen is taken in by plants and animals to release carbon dioxide.

Carbon dioxide is taken in by plants to release oxygen. Within the Biosphere Animals depend on plants for their food. The decomposition of annuals provides manure for plants.

Read Also: Differences Between Rotation and Revolution of the Earth

In conclusion, each structure of the earth has the above-highlighted structure written in brief and priority points.

Problems of Democracy in Nigeria