Fibroid and its Causes, Symptoms and Treatments 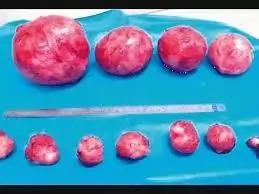 Fibroid and its Causes, Symptoms, and Treatments will be discussed here. This is to guide you in caring for your health.

Symptoms and Causes of Fibroid

Fibroids (sometimes called uterine leiomyoma, benign tumors, or myomas) are growths in the womb of a woman or young lady.

Over 53% of Nigerian women are often diagnosed with fibroid before or after the birth of a child yearly. Fibroids come in different sizes.

It could be as small as an orange seed or as big as a grapefruit and it is possible to have multiple growths of fibroid in your body.

It is advisable for all women to go for medical checkups as fibroids could grow in a woman’s body without showing any signs or symptoms which leaves infected persons ignorant of the existence of the deadly growth in their bodies.

It is even more advisable for pregnant women to have themselves checked up against the growth lest they carry a fibroid in their womb thinking it’s a baby.

When fibroids are diagnosed and treated early, they are not dangerous or cancerous but when they are ignored, they are so dangerous that they may even cause serious complications in the body of the affected person.

There are three kinds of fibroids and they derive their names according to where they grow:

When fibroids decide to show signs in a person’s body, their signs are dependent upon factors such as the location, size, and quantity of fibroids present in the woman. These signs include:

A person who is between the age of 30 and 50 is at a higher risk of having fibroids, although it happens in very rare cases of underage women who began seeing their periods before the age of 10 or those who have a family history of fibroids and especially those who are overweight.

A woman who tries to control births by the use of drugs is not left out of it as the drugs may likely have a side effect that may lead to fibroids.

It is also common among women who do not feed well or get involved with the use of hard drugs and alcohol.

Fibroids develop and grow at a very slow pace when they grow in a woman and most times fibroids only develop after menopause (when a woman gets past the age of giving birth to children).

In order to treat fibroids, a person should: