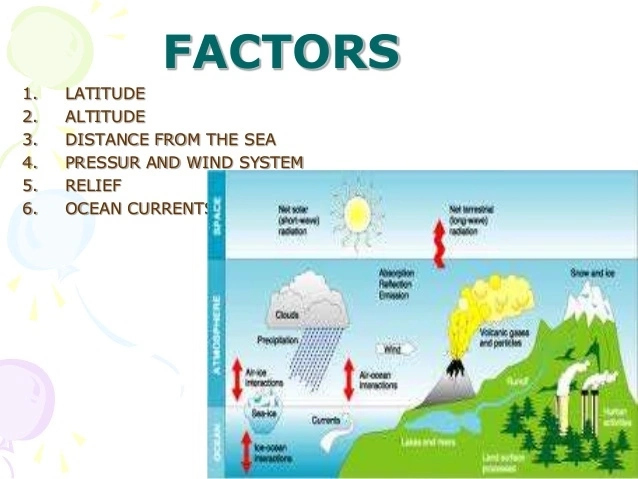 8 Factors Affecting Climate Change are listed and discussed herein. We hope you find the article informative and helpful for your research.

Factors Affecting Climate of a Place

Read Also: Information About The Planets

From one part of the world to another, the climatic condition changes, and this change is because of the effects of the following factors:

This refers to the location of a place on the surface of the earth when related to the equator. The Tropical latitudes, where the sun‘s altitude is always high have hotter temperatures than lower latitudes where the sun’s altitude is usually low. These differences in temperature in relation to different latitudes affect climatic conditions.

Read Also: Ways To Protect Your Zoom Meetings From Hackers

Altitude refers to the height that a place has above the level of the sea. As a person moves higher into the atmosphere, the temperature reduces by 6.5°C for every 1000 meters of ascension.

This is usually referred to as the normal lapse rate. High altitudes like high mountains contain less dust and water vapor and so allow heat to escape easily and still remain cold.

3. Continentality or distance from the sea

Generally, the further the island is from the sea, the less the rainfall, for example, free town on the coast and Timbuktu on the inland.

Cold currents help in the formation of fogs along the coast adjacent land, e.g. warm Guinea and warm currents of Mozambique.

Warm. Moist winds from the ocean bring rainfall to the adjacent coastlands, e.g. W. Monsoon in West Africa. Dry winds from the interior do not produce rain, rather they produce dust and dryness, e.g. North-East trade Wind brings no rain but dust and dryness to the coastal lands of West Africa offshore winds blowing from the interior to the coat produce fogs at the coast, e.g. fog formation along the Namibian coast.

A steep slope experiences a more rapid change in temperature than a gentle slope.

Read Also: Importance of Tourism to the Nigerian Economy

The tick foliage (leaves) of heavy forest cuts off much of the incoming sunlight energy (insolation). As a result, the forest temperature is cool and lower than that of the open ground (soil). Light soils reflect more heat than darker soils which are better absorbers of heat.

15 Ways to Make Money as a Student

How to Stop Land Pollution